Unauthorized use and/or duplication of this material without express and written permission from this blog’s author and/or owner is strictly prohibited. Excerpts and links may be used, provided that full and clear credit is given to Robyn Miller and Therapeutic Babywearing with appropriate and specific direction to the original content.

The Impact of Babywearing on Postnatal Mental Health: Mothers’ Voices

According to the Joint Commissioning Panel for Mental Health (2012), childbirth is a significant risk factor to women’s mental health.

There is a marked elevation of risk in the early weeks following delivery of:

Many sources quote that one in ten women suffer from postnatal depression but last year (2014) it was reported by the Royal College of Midwives (RCM) that nearly 60% of mothers felt down or depressed after giving birth. 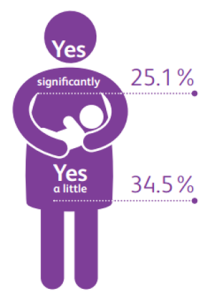 “Relapse or recurrence of previous post-partum mental illness is well established and believed to be a risk of between 33% and 55%.”

And the Royal College of Obstetricians and Gynaecologists (2013) observes that:

“Young, single mothers are thought to have a three times increased risk of post-natal depression compared to older women.”

This demonstrates that postnatal mental…